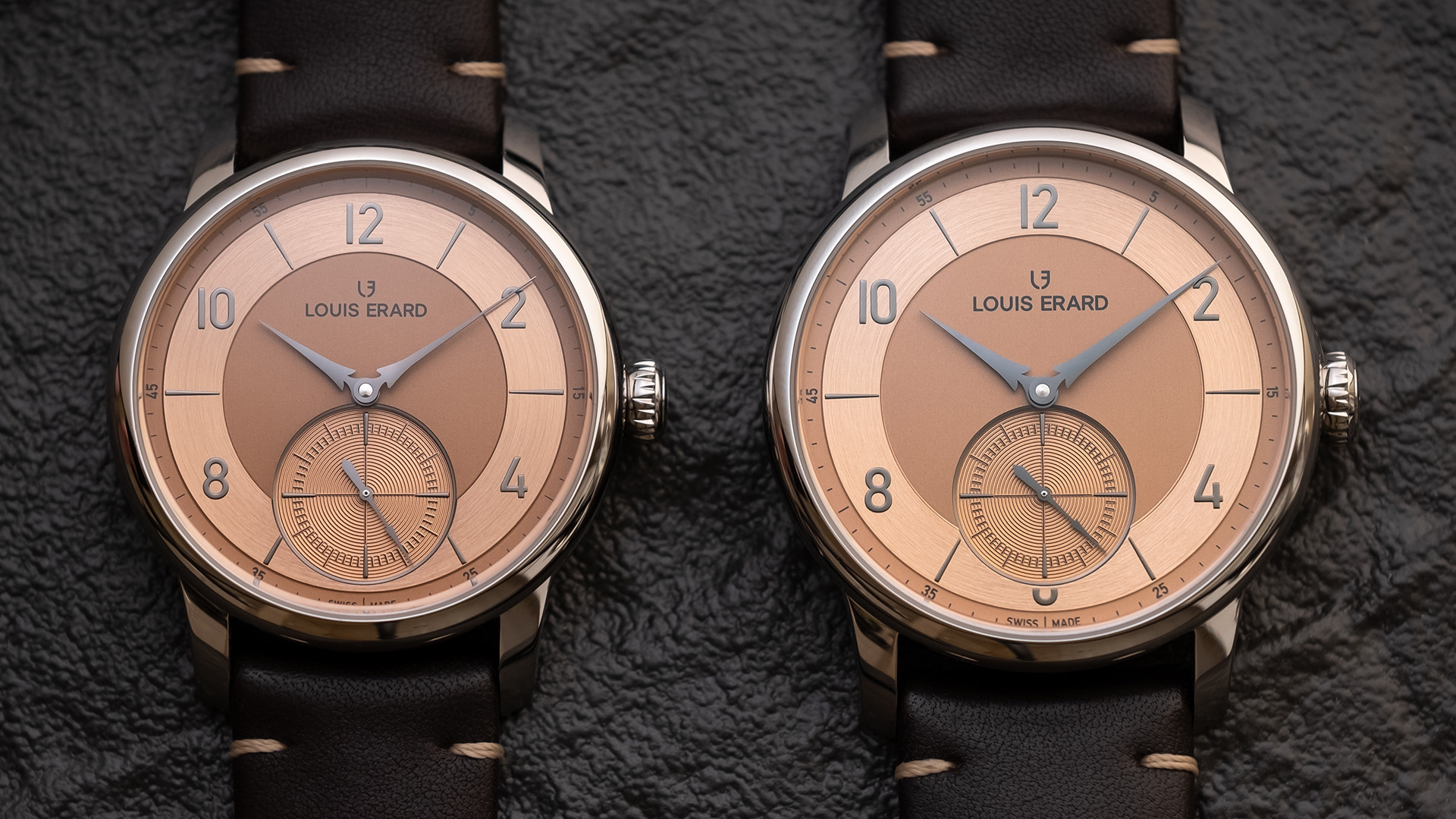 Amid the broader stylistic movements taking hold of the modern luxury watch industry, a more subtle trend has largely flown under the radar – the return of sectorial dials. Across the industry, from boutique independents to massive names like Longines, brands have turned their attention to the elegantly segmented and graphic dial layouts of the 1930s to 1950s as inspiration for a new generation. of vintage inspired clothing designs. Louis Erard is the latest brand to explore this classic style, combining a multi-finish sector dial layout with a beautiful vintage salmon color. The new limited-production Louis Erard Excellence Petite Seconde Terracotta series offers an impressively nuanced finish, as well as a clean, wearable case design in a pair of size options. 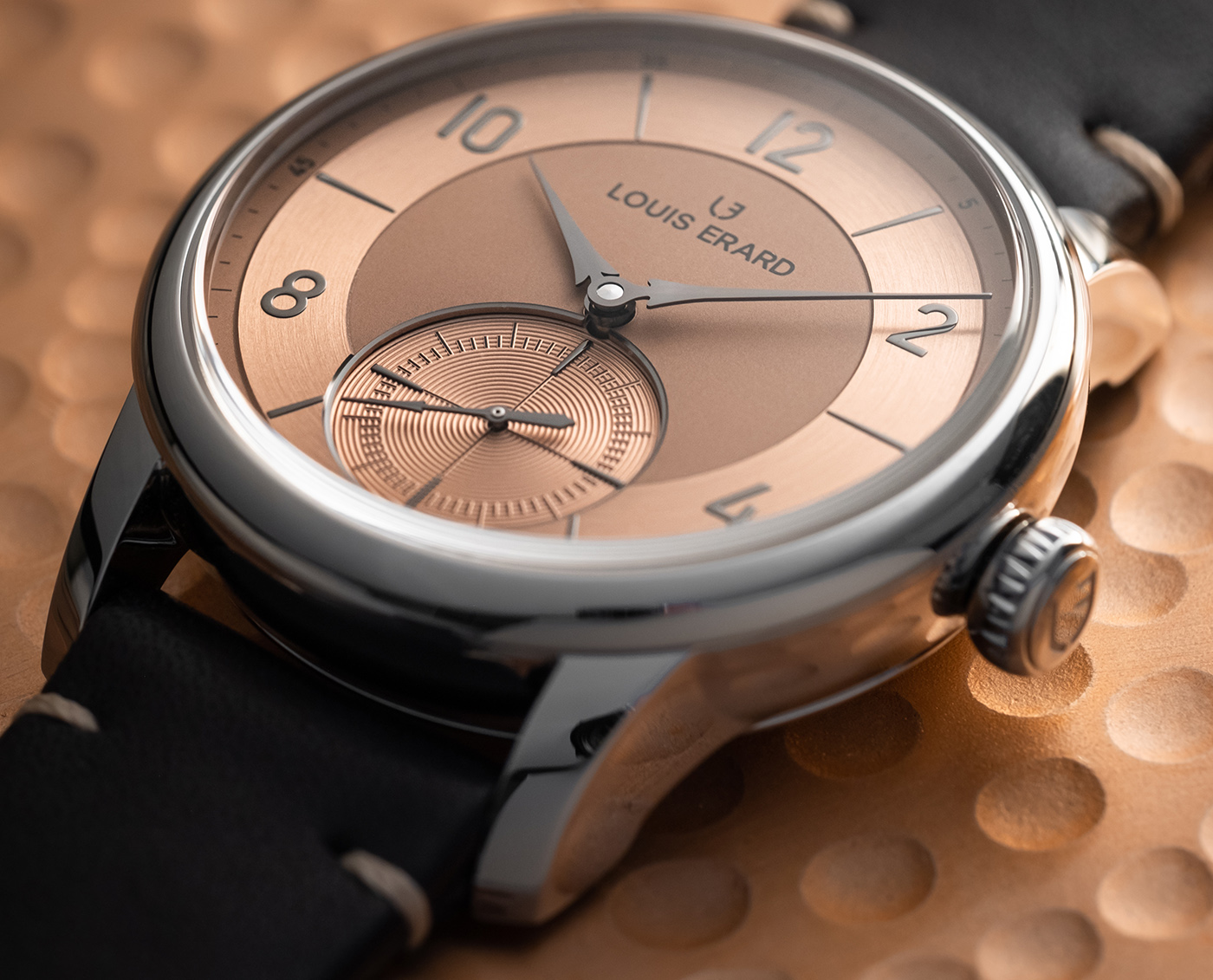 Available in 39mm and 42mm diameters, the polished stainless steel case of the Louis Erard Excellence Petite Seconde Terracotta series takes a simple and classic approach to dressing up watch design in pictures. The long, straight lugs feature a pronounced downward curve, the side profile of the case is gently rounded, and the smooth bezel is elegantly narrow to give the design an all-dial look when viewed from above. The 39mm model balances these elements cleanly and evenly in the images, but the larger dimensions of the 42mm model give this variant a more modern and muscular edge. Both variants come with sapphire bezels and offer an average water resistance of 50 meters. 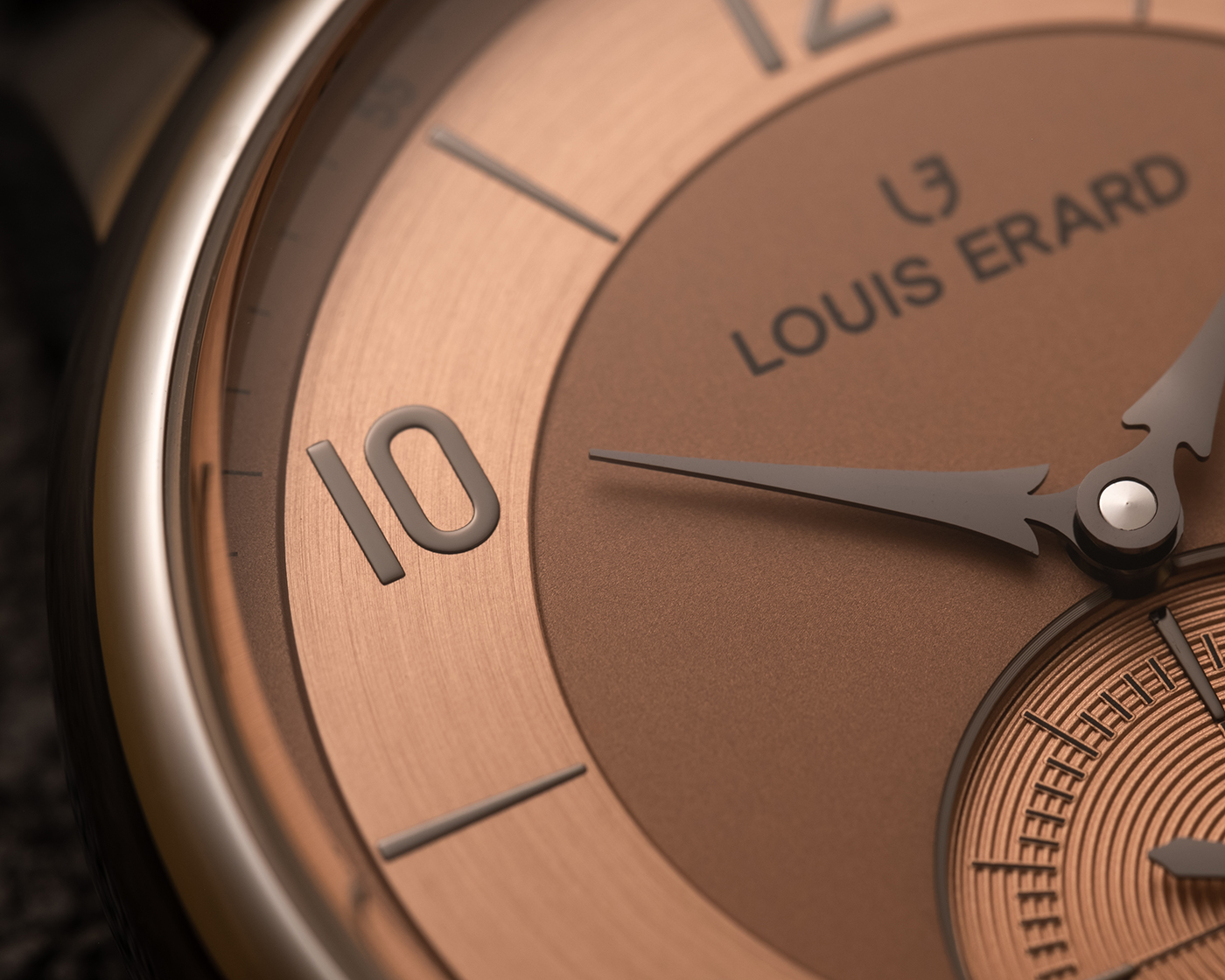 The design of the dial is the true centerpiece of the Louis Erard Excellence Petite Seconde Terracotta series. Louis Erard skilfully plays with color and surface in the images, creating a design that both feels rooted in the classic dress watch designs of the 1940s without becoming too beholden to any specific inspiration. The dial surface itself shows a wealth of depth and nuance in the images, with an understated salmon hue and lightly grained matte finish over most of the dial. The radially brushed hour ring gives this color a chance to shine with a more dynamic surface, and the recessed small seconds sub-dial at 6 o’clock gives the design a greater sense of overall depth while providing additional texture. with an azure finish. Louis Erard contrasts the soft hue of the dial with anthracite gray for the brand’s signature fir handset, as well as the mix of printed indexes and airy printed Arabic numerals. By avoiding a deep black hue for these elements, the dial of the Excellence Petite Seconde Terracotta retains a soft, nuanced feel in the early photos, whereas a fully saturated black would likely visually overwhelm the rest of the design. As with the cases, the 39mm and 42mm variants approach the proportions of these dials differently, and each model makes notable compromises on the layout. The 39mm model offers the more classic look of the pair, with a tighter dial that deftly divides the visual space between the matte main dial and the brushed hour ring. However, these more compact proportions make the lightly printed outer minute track difficult to read at a glance in images, and the small seconds sub-dial at 6 o’clock overflows the indexes at 5 and 7 o’clock in which will likely be divisive. move among enthusiasts. Interestingly, the 42mm model appears to use the same sub-dial size as its smaller counterpart, leading to a partial printed number at 6 o’clock. The greater abundance of negative space gives this larger variant a more open and contemporary look in the initial images, and the larger outer minutes scale noticeably improves the readability of the images. Given these varied design quirks, adding 40mm to the line would likely effectively split the difference between the two models and prove a hit with enthusiasts. 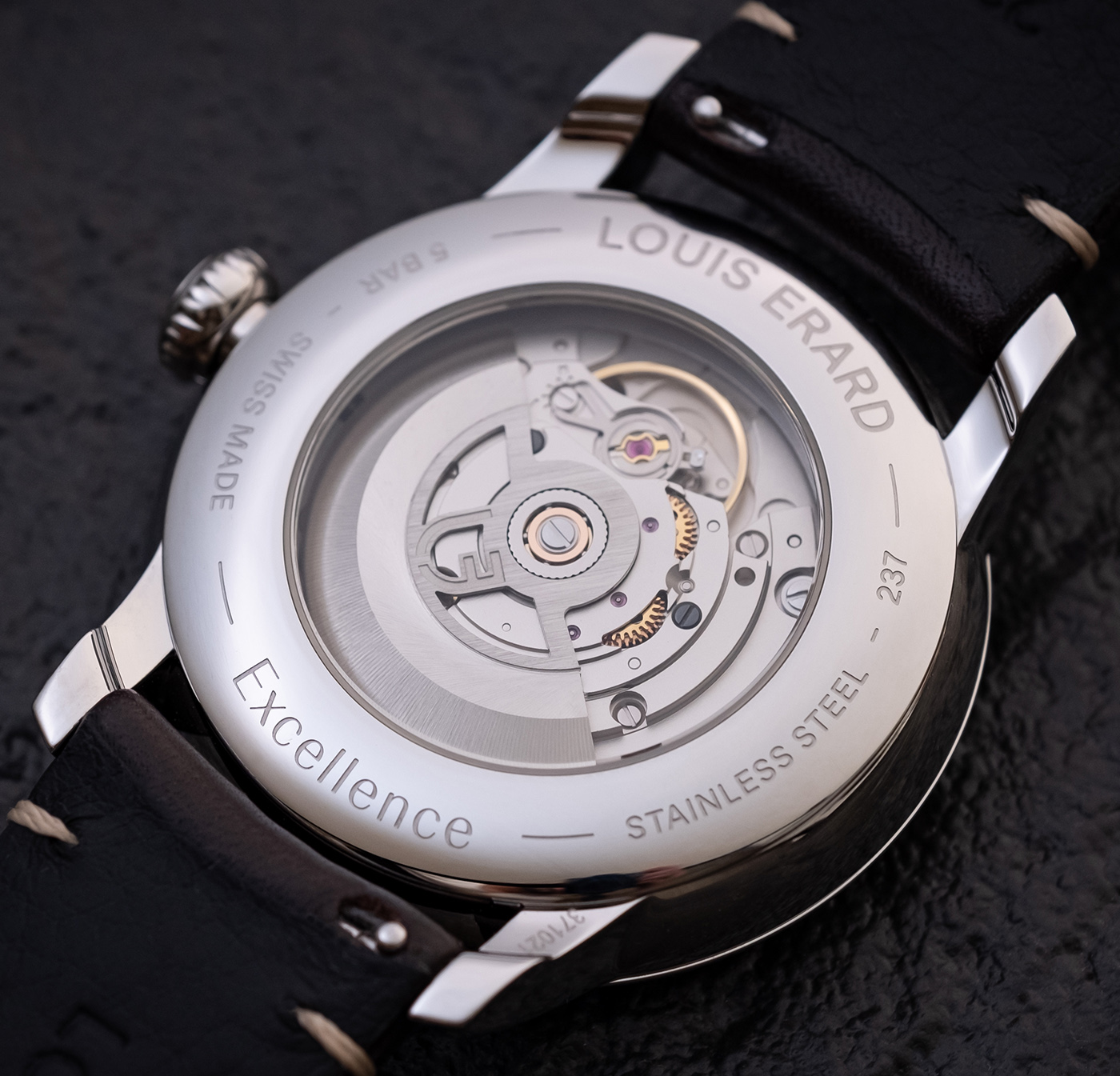 Louis Erard powers the two versions of the Excellence Small Second Terracotta with the Sellita SW266-1 automatic movement. Louis Erard’s finish on the SW261-1 is simple and functional, with matte finished bridges topped with a custom signed brushed skeleton rotor. The performance of the SW261-1 is almost identical to that of its central seconds-equipped counterpart SW200-1, with a mediocre 38-hour power reserve and a beat rate of 28,800 bph. Louis Erard finishes both variants of the watch with an extremely dark coffee-brown calfskin strap, with black undertones and wheat-colored stitching. 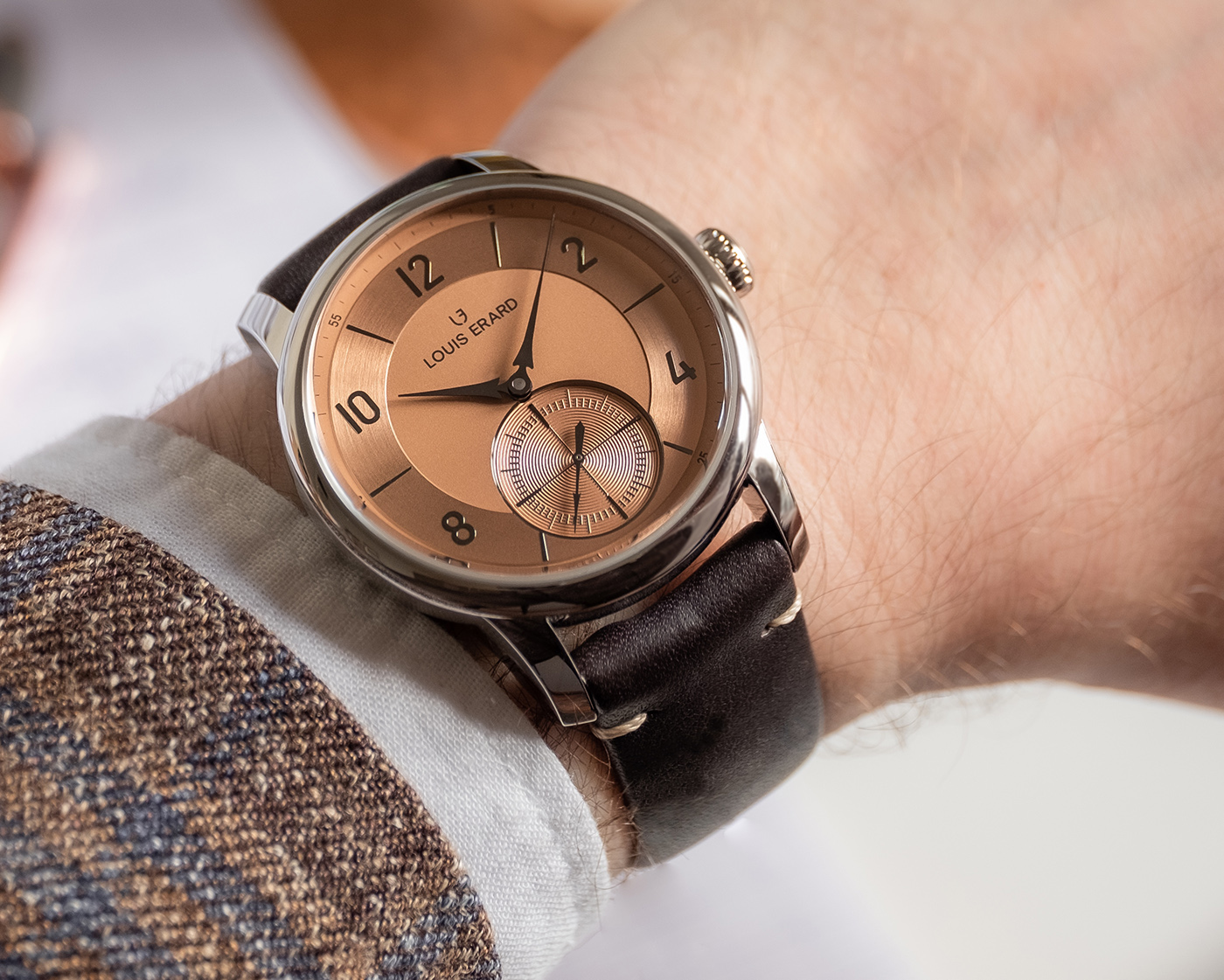 With a finely detailed dial finish, a charismatic muted colorway and a pair of versatile sizing options, the limited-production Louis Erard Excellence Petite Seconde Terracotta series offers a nuanced and eye-catching take on the industry’s growing dial watch trend. While not strictly limited in terms of overall production numbers, the 39mm and 42mm variants of the watch will be limited to just 100 made per year. Both versions of the Louis Erard Excellence Small Second Terracotta are available now from authorized retailers. The MSRP for both models is CHF1,950 at press time. For more information, visit the brand’s website.